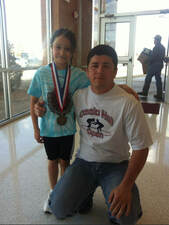 Woman's wrestling is the fastest growing sport in America.  Watching it develop in our state has been truly amazing. There are over 40 girls' college wrestling programs with additional colleges coming online each year. The growth of the sport is pushing top men's programs like Oklahoma State and Iowa to consider adding a Women's program. They are already sponsoring female athletes at their respective Olympic (regional) Training Centers.

Oklahoma's state athletic association has sanctioned Girls Wrestling since 2019. Several high schools across the state have women only wrestling teams. Most notably, Broken Arrow has won the first and second team title at their state meet.

Coach Kyle has helped pioneer girls wrestling since 2012 by starting the first girls wrestling program in Oklahoma.
​
At Team Tulsa, girls can practice along side and with the boys but neither gender is forced to wrestle the other .